by Lloyd A. Conway

Lloyd A. Conway, originally from Detroit, MI, is a retired veteran of the Army & National Guard, was a civil servant for 20 years and has been an adjunct teacher at Spring Arbor University for the past 20 years. Mr. Conway previously served on the Charlotte, MI City Council and chaired the Planning Commission. He holds degrees from Excelsior College, Wayne State University, Western Michigan University and Eastern Michigan University. He is married to a fellow teacher and has five adult children. They reside in Lansing, MI.

As an economist-archaeologist, Michael Hudson is a rarity.  This rather unique combination of professions has been Professor Hudson’s calling card for decades, as he has specialized in economic issues pertaining to the civilizations of the ancient Fertile Crescent. His life of scholarship is now capstoned in a November, 2018 volume, …And Forgive Them Their Debts: Lending, Foreclosure and Redemption from Bronze Age Finance to the Jubilee Year, a scholarly look at ‘Jubilee Year’ traditions in the ancient Near East, including those contained in Mosaic law. While the author does not approach his subject from a Christian worldview, he does argue for the validity and implementation of jubilee years, just as described in the Old Testament.

Professor Hudson traces the use of debt relief back to  earliest recorded history. Almost from the beginning of Mesopotamian urban society, there are recorded instances of the accumulation of peasant/working class debt, typically debt from loans to farmer-proprietors for seed and tools, made against a share of an expected harvest. Those debts, calculated at interest rates based on the Sumerian calendrical system, carried interest rates of as much as 33 1/3%. This burden, while heavy, was bearable in years when the harvest was good. In times of drought, famine, war or other disaster, such debts could not be paid.

Debt-bondage and forfeiture of the means of production—tools, lands, even family members, and finally the debtor himself—were all too often the results of such crop-loan schemes. As debts increased via interest, at rates exceeding income growth (which Professor Hudson cites as a common progression), most people were unable to pay those debts off. The end result was a recurring cycle of misfortune, bondage, and the resulting rise of a rentier class that both oppressed the working poor and threatened the State. The remedy applied at the accession of many kings, of which Professor Hudson gives extensive examples, was to forgive all personal (but not business or speculative) debts, whether owed to the State for unpaid taxes or to the wealthy (often temple officials, who also functioned as bankers). Monarchs benefited from this by helping to keep subjects free and thus able to pay taxes, render corvée labor for canal repairs and the like, and serve in the militia when necessary. (Offering debt relief to the bond-subjects of one’s enemies in wartime was also a common tactic, which made debt relief all the more advisable for monarchs contemplating war, either as aggressor or defender.)

The recurring cycle of debt and forgiveness continued until the advent of Iron Age civilizations in Greece and Rome, which were famously unstable due to their debtor-creditor class conflicts. Israel kept the tradition of debt relief alive, with a twist: Instead of being offered through the good graces of an ascendant monarch, forgiveness of one’s debts was offered through the grace of Almighty God, the good news of which was announced by the priesthood and codified in Mosaic law.

Sadly, whether in ancient Sumer or in Israel, creditors were clever in finding ways to circumvent debt jubilees, including by post-dating loans or having debtors explicitly disavow debt relief, if it were to be offered in the future. In the case of Judea, via the ‘Prosbul’ of Rabbi Hillel, debtors were allowed to exempt their obligations from discharge during the Jubilee Year, thus substituting innovations of sinful men for the Word of God.

Professor Hudson concludes his tome with a chapter on ‘the Byzantine Echo,’ when some emperors of the Eastern Roman Empire put Christian principles of political economy into practice, helping to tamp down rentier activity detrimental to the tax base and military strength of the State. This policy yielded good fruit until set aside by the Commenian Dynasty beginning in the late 11th century.

Professor Hudson’s work is detailed, exhaustive, and perhaps a bit dry for those not particularly interested in his subject matter, but he has done the public a good service by identifying the Jubilee Year as something common, effective, and widely used for millennia to keep societies in balance and able to avoid the class-based social unrest that rocked Classical societies to their foundations time and again. ASP readership may find this book of interest because of the policy implications of a Bible-based debt relief policy, including helping to ameliorate income inequality, preventing social unrest (the usual outcome of having a long-term debtor class in a society) and re-balancing a socio-political system to ensure its continuing viability. While we may not share his secularist worldview, we can appreciate his scholarship, as it validates the historicity of the Biblical injunction to regularly forgive personal debts. It will be up to us, as his readers and benefactors, to consider how we might apply his scholarship to the issues of debt, income inequality and the political problems flowing from them in our time.

Hudson, Michael.  (2018.) And forgive them their debts: Lending, Foreclosure and Redemption from Bronze Age Finance to the Jubilee Year.  Islet Press. Cambridge, MA. 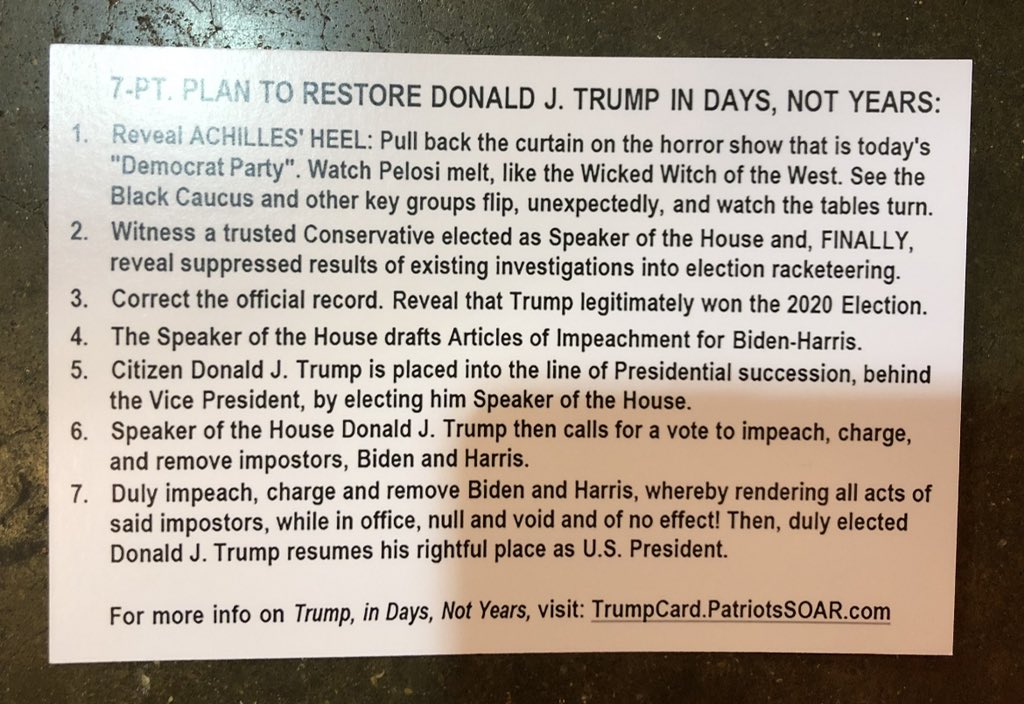 Andrew Solender @AndrewSolender
CPAC attendee sent me this pic of a card they were handed about a “7-pt. plan to restore Donald J. Trump in days, not years,” which involves installing Trump as speaker and ousting Biden & Harris. https://t.co/dS0tQ5jW7b
5
35

Call us old-fashioned, but These United States are cool and the flag belongs to all of us. 🇺🇸🇺🇸🇺🇸 https://t.co/4PKjmjYXYw
View on Twitter
14
106
Skip to toolbar